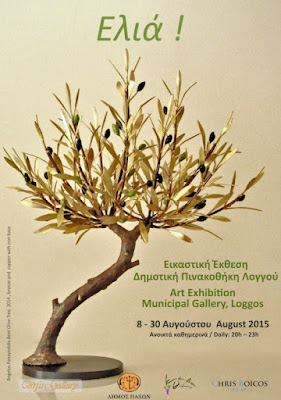 Dear friends,
We would be delighted to see you at the private view of the new summer art exhibition Ελιά ! at the Municipal Art Gallery of Paxos in Loggos on Saturday 8 Αugust from 7.30 to 11.30 pm.
18 Greek and international artists are featured in Ελιά ! , among those Angelos Pannayiotidis ( Άγγελος Παναγιωτίδης ), creator of the official olive branch for the Athens Olympic Games of 2004 will be exhibiting and attending the opening.
The exhibition has been curated by Chris Boicos Fine Arts  and Corfu Gallery with the kind support of the municipality of Paxos.
Ελιά !  Art Exhibition from 8 to 30 August, open daily 8 to 11 pm.

Piano recital:
The young musician John Sebastian Motorinos from Corfu, graduate of the musical department of the Ionian University will be playing for us for the duration of the private view. 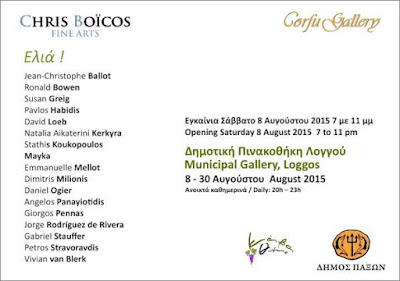 A summer show in at the Paxos Municipal Gallery of Loggos from 8 to 30 August 2015.
Curated by Chris Boïcos of Chris Boïcos Fine Arts, Paris – Paxos, and Leonidas Yiohalas of Corfu Gallery, .
There are an estimated 300,000 olives trees on Paxos today, many of which were first introduced by the Venetians in the sixteenth century, when Corfu and Paxos became the main olive oil producers for the .
The history and tradition of olive cultivation in Paxos and has inspired the forthcoming summer exhibition. Eighteen contemporary Greek and international artists celebrate the olive and the olive tree, as one of the oldest icons of the Ionian islands, Greece and the Mediterranean world in general.
All artists have been asked to handle the subject of the olive, each in their own style and specific technique (painting, printmaking, photography, ceramic, bronze). The result is a rich, multifaceted show showcasing the olive from every angle in a manner that is serious or light, witty or irreverent. 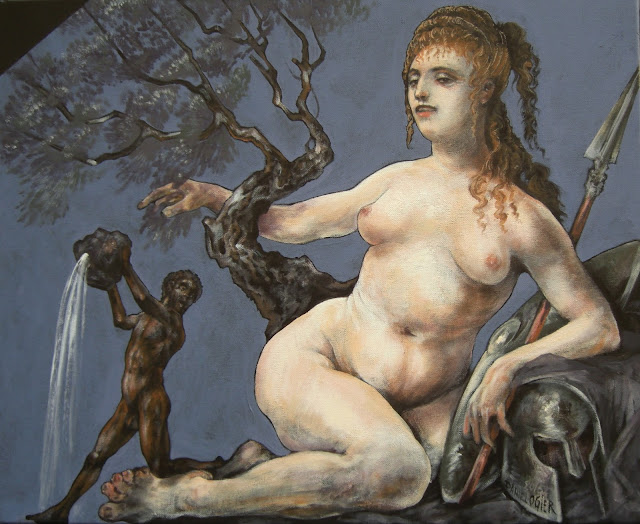 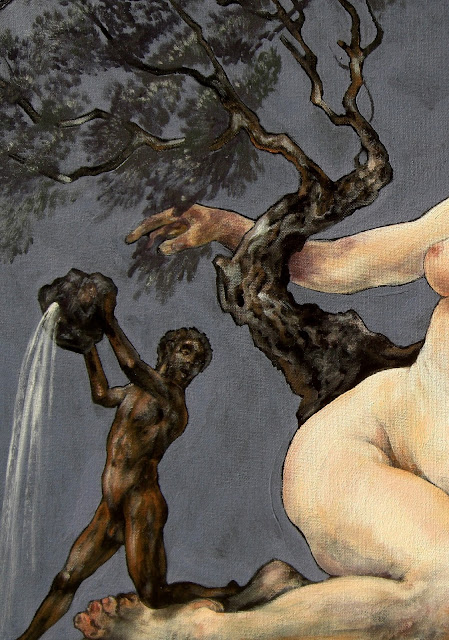 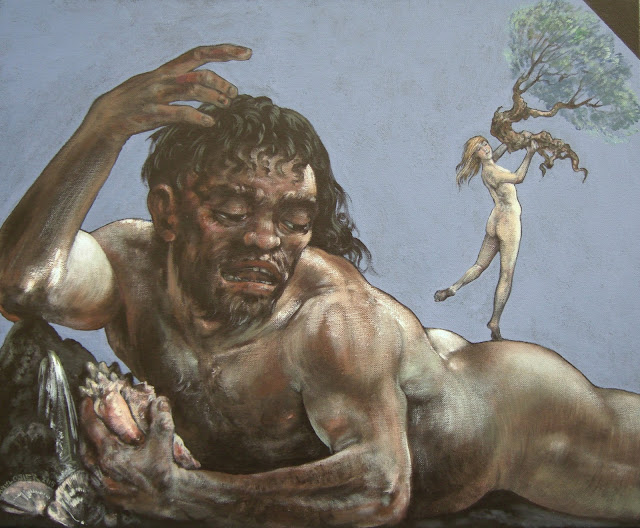 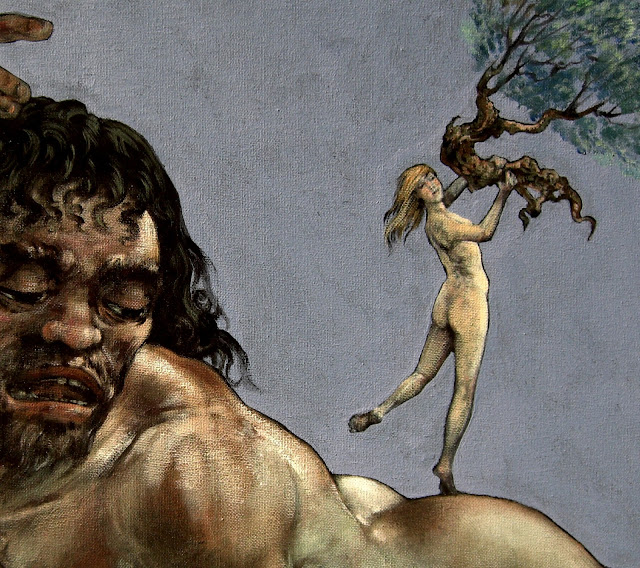 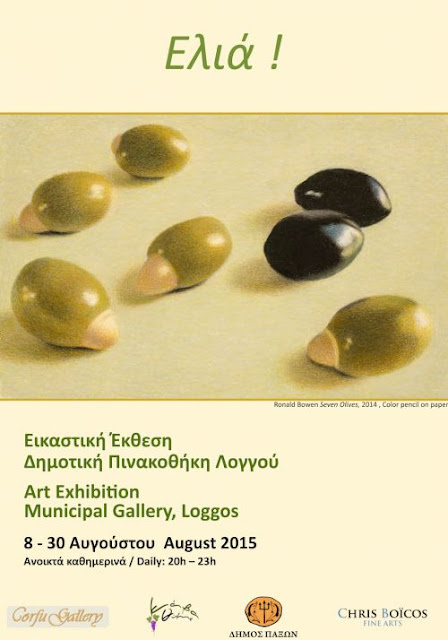 The Venue: Paxos Municipal Gallery at the Old Schoolhouse in Loggos
The Loggos schoolhouse, like the other five original schoolhouses of Paxos, was built in 1904- the neoclassical style typical of most early 20th century Greek buildings, both private and institutional. The great number of school houses for such a small island is due to the fact that the then minister of education of was the Paxiot Theodoros Vellianitis, from one of the oldest families of the island. 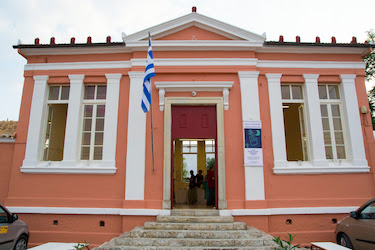 The building of a modern central school in Paxos in the 1980’s rendered the old schoolhouses redundant. The Loggos and the Lakka schoolhouses have since been used for cultural events, serving as art exhibition spaces and also as venues for the Paxos classical music festival inaugurated in 1985. The first art exhibition held at Loggos, “Landscapes & Myths II” was organized by Chris Boïcos Fine Arts in the summer of 2014. The second exhibition, “Printmaking: Techniques & Styles” was held along with a printmaking workshop by artist Emmanuelle Mellot in July 2015.
The schoolhouse faces the and is the most prominent building on the seafront along with the ruined old soap factory next door. A spacious yard occupies the rear of the building. The lofty and harmonious proportions of the interior, beautifully illuminated by ten tall, narrow windows, make it an ideal venue for the presentation of pictures and sculpture. 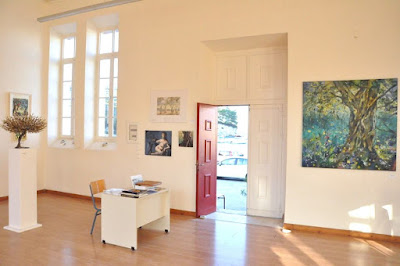 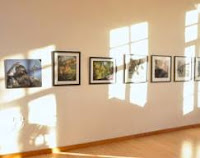 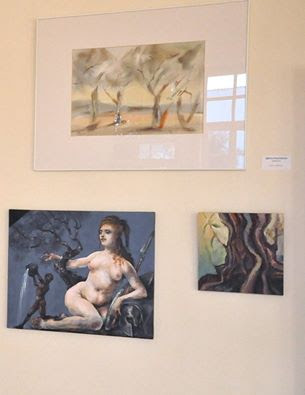 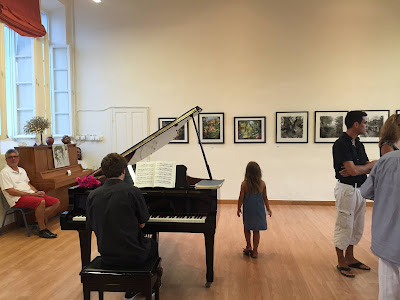 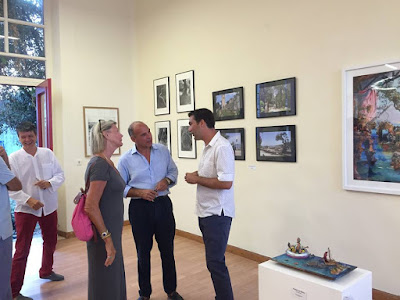 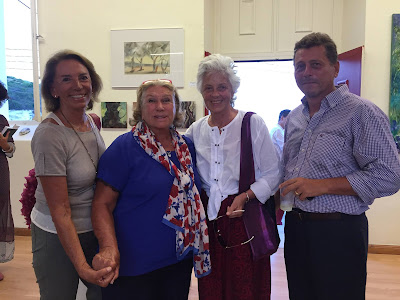 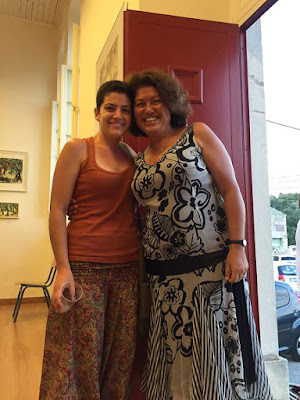 Leonidas Yiohalas is the founder and director of Corfu Gallery.


Corfu Gallery was inaugurated in 2011. It is located under the arcades of , one of the most picturesque streets of the old town of . Corfu Gallery shows works by established Greek artists, while also providing a platform for young talents. It is by far the most innovative private fine art gallery in .